Magic As A Reality

The word ‘magic’ can mean different things to different people. For some, just watching the sunset or seeing a beautiful view can be magic, for others it is trickery and sleight of hand and yet for others, me included, magic is real magic. Real magic is making something happen through willing it to be. However, before we go too much further, let us make a few discoveries together that may convince you that we are all magicians and that we work real magic each and every day. 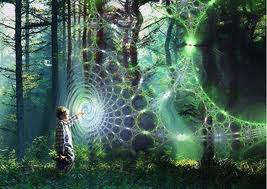 As you are reading this, your eyes are taking in light from the computer screen. The light enters your eye. It is then converted into electrical signals and they are then sent to a part of your brain where they are processed back into a picture. The picture is upside down by the way. Your brain even presents it to your consciousness the right way up. The image that you see is actually ‘created’ inside your brain. It is the same for the feeling being transmitted from the nerves in your bum that is right now feeling rather numb from sitting on that seat. It is just a set of electrical signals sent to the brain where they are presented to your consciousness. Think about this a bit more and you understand that you are just a cloud of atoms within a cloud of atoms. Even your brain is simply a cloud of atoms.

What is reality? Is your reality, created inside your brain, different to mine? When we both ‘see’ the color purple, are we even seeing the same hue or color? We are trained to know that that particular set of vibrations is to be described as ‘purple’.
Quantum physics (don’t go away, I won’t bore you with too much detail) has been trying to unravel reality for quite some time now and what physicists have discovered is simply mind-boggling. The brain is presented with much more information than you can use so it dumbs it down. It chooses what to present to your consciousness and it does so moments after what you are observing took place. Imagine that! In fact, everything is vibration or, put in a more scientific way; it is all waves of different wavelengths. Quantum physics shows that waves can be particles and particles can be waves – the decider of whether wave or particle is the observer – you. The act of observing by a consciousness ‘collapses the waveform’ into particles.

What does this mean? It means that you continuously create your reality and that you interact there with other co-creators of reality. Yes – it is all a sort of matrix and that is a scientific fact. How you feel, how you are raised, how you speak, what you say, what you think and a myriad of other inputs determine your reality from moment to moment. Isn’t that the work of a magician? Don’t you make magic every instant of your life?

Imagine what you could do if you were truly a conscious being and not operating more or less on autopilot much of the time? Maybe you could make things change via force of will and imagination. It’s all about your imagination you know. Maybe it isn’t so much faith that can move mountains as it is about imagination and faith in that imagining. If you have come across ‘cosmic ordering’ or The Secret, then you have been exposed to a rather crude and materialistic form of this concept. It is by the way, no secret, it has been known by occultists and magicians for thousands of years.

In my new novel, The Last Observer: A Magical Battle for Reality

, published by Roundfire Books, I use these ideas to create a compelling story about reality and magic. A group of black magicians is killing people who have the talent to observe reality and therefore create it. Most people are sleepers and react to the reality presented to them as opposed to actually creating it. Stanley, a bookworm with a very well developed imagination, is their next target. He is the last observer and it falls to him to make sure the good guys win even though he doesn’t believe in magic and knows nothing about quantum physics. Once his life is in danger, he has to learn fast.

So, the next time you think of magic remember that you are a magician and you are making magic the entire time, whether in terms of observing the sunset, through your sleight of hand, or by simply willing that parking place to be there just for you when you arrive at the mall. That’s reality and that…is magic.

Originally published as The Reality of Magic

The Last Observer is available at all online book stores…..