As a young child I think I was quite innocent. Perhaps I was a tad over protected by my parents or perhaps I was just built that way. To be honest I do not know. I do know though that I had (and to some degree still do have) an imagination. My imagination was such that I drew other children in to my fantasy land and when I left it even momentarily, they stopped playing there. It was as if I were the catalyst for whatever fantasy we built. It was I that built layer upon layer of substance out of sticks, dustbins, stones and such. I would often delay having to go to the bathroom simply because I knew that on my return, the fantasy would be lost, gone, over. Looking back, it was if I created and wove the dance we danced in my childhood reality. And perhaps I did.

I dreamed well too. Better then than now. Lucid dreaming, something I find difficult these days, came naturally to me then. I would willfully continue a dream night after night picking up right where I recalled leaving off. One dream was about a girl. She lived in a castle-like house on an island. It was a small island with steep cliffs all around and it started with me finding a cave and working my way up to find the house. Looking in through a window I saw a girl. She was beautiful and I loved her as soon as my eyes saw her (she was my age in the dream – 6 or 7 perhaps). She looked sad and I wondered how such a pretty girl living in such a house could be so sad?

One day she caught sight of me. We made signs and faces through the window. She even smiled. But she kept looking around nervously. She would shoo me away at times and I would hide and spy as the witch-like lady entered the room and the girl would cry. I eventually discovered the witch-like lady was an evil old hag who practiced black magic in the basement and caves below the house. She abused the girl who was her niece. I discovered the girl’s parents had died leaving her in the care of this wicked Aunt. As the dream continued, she would let me in and we would play happily in that room until the Aunt came and then I would hide or leave or hide and then leave my heart pounding like a drum.

In the end, I was discovered and caught. The girl and I were taken to the basement and we were tied up. Somehow, we escaped and turned the tables on the wicked witch ridding the world of her via her own evil magic once and for all. The girl was free. She was happy and smiled and we would play until, eventually, the dreams stopped.

These dreams took place over an extended period of time and if you analyze them they have elements of all fairy tales don’t they? The wicked witch, the sad and mistreated niece or step daughter and the prince who frees the girl and, in the end marries her. The part of me that faces and confronts something within me and defeats it in order to reconcile other aspects of myself.

When I look back now at my childhood I wonder at how magical it was. I wonder at the abilities I seem to have lost or misplaced as I have grown older and become a part of another world. Imagination is a precious commodity and the art of dreaming is a wonderful and magical tool to heal oneself. I am convinced at times that I really lost something growing up, something truly magical. Some gift I was born with. Perhaps we all have. You see the problem is that “The moment you doubt whether you can fly, you cease for ever to be able to do it.” 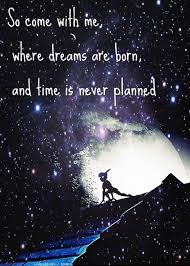 JM Barrie and Peter Pan has some interesting quotes throughout in my opinion that now resonate with me. Just consider the following and perhaps you will agree…

“There could not have been a lovelier sight; but there was none to see it except a little boy who was staring in at the window. He had ecstasies innumerable that other children can never know; but he was looking through the window at the one joy from which he must be for ever barred.”

“Never say goodbye because goodbye means going away and going away means forgetting.”

“You know that place between sleeping and awake, that place where you can still remember dreaming? That’s where I’ll always think of you.”

“All the world is made of faith, and trust, and pixie dust.”

You see, the thing I miss about being a child is my Peter Pan. Everyone of us has Peter Pan within us and we lose him growing up. Some of us never realize it nor care but others, like me, keep looking and searching for Neverland knowing that, not only does it exist but I once went there all the time…..