Encouraged by my current reading of Alan Richardson’s latest book – Dark Magery – I have been exploring the God form. It’s not something I have ever attempted much in the past but for the last few days, I have been knocking on Perun’s door. Perun is the slavic God of thunder and one of the most important in the pantheon. I must say, at first, I got nothing much at all and was rather disappointed but then last night, I had some very strange dreams….. and today in short session where I took on the form of Perun in my imagination, some very strange thoughts.

What I sensed was that Perun and the slavic culture of that time was really quite alien compared to now. For them, I got the idea that death was not much of an issue as for them the shadow side of life existed in balance with that of the living. Perhaps we would think that life was held in scant regard and was cheap but this I feel would be a tremendously wrong simplification. The feeling I got was that the afterlife or the underworld was there – a very thin veil separated the two – so it wasn’t that life was cheap – it was in fact venerated I feel – but when you sense that the afterlife is right there and almost visible or accessible – then the transition from living to dead simply isn’t the massive thing we would think of now. This strange sense of living alongside the dead and never lived was truly an alien feeling that entered my perception and I cut short the session to write it here…. It seemed to me to be a aha moment in fact sitting there in meditation assuming the form of Perun in my mind. 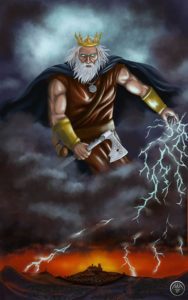 Perun of course, is counterbalanced by Veles, Slavic God of the underworld and the two are perpetually fighting but essentially balance is maintained via this conflict. The two worlds exist side by side and the thinnest of veils separate them at either end of the mighty oak symbolizing the world.

Being a man that never saw much value in developing a physique, the other part of taking on the form of Perun is the bulk of muscle and now I rather regret not having buffed up a bit. It actually feels pretty good to be muscular! However, it was the realisation of how alien a world the slavic world may have been by modern standards that permeated my consciousness. What this helped me understand is how transient things are and how the current emerging culture of politically correct, avoidance of any perceived offensiveness and so on seems to be totally at odds with the progress of humanity; despite what some people may believe. It is only through being offended, hurt, wounded and so on, that we learn and grow I would say, so to avoid that, seems counterproductive. In particular, this smug habit of looking back and judging characters of a certain time by today’s supposedly superior standards and condemning our ancestors as racists and so on, is also actually counterproductive – they lived in their time, to their standards and we have no basis to judge them or their times. Rather, we should perhaps seek to understand their environment and learn from it.

This brings me to another topic altogether. One of naming things. By giving something a name, we identify it as separate to ourselves. More and more, I hear my 13-year old daughter using these names to blame others for some trait – e.g. transphobic and so on….. I keep telling her that people are individuals with their own battles, demons, fears and battles to fight. When she names them using such terminology, I suggest she may be doing them the injustice of dumbing down them down to a caricature of something she actually fears within herself. Of course, she looks at me like I am crazy. Perhaps I am.

Get my Newsletter! - unsubscribe anytime. Sign up at here
Follow The Magical World of G. Michael Vasey on WordPress.com
©2011 - 2020 by G. Michael Vasey. You are welcome to use excerpts, reblogs and links as long as clear, named credit and appropriate links back to this site are used. Written permission is required for all other reproduction. Thank you. Photographs are the property of their original owners and may be subject to copyright. All rights reserved.