A Glimpse of the Otherworld?

Earlier this summer, I went to Croatia for a vacation. Vir, to be precise. Nearby, we discovered the little town of Nin and also a strange little church on hill in the middle of nowhere between Zaton and Nin. We stopped for a look parking in the large and empty parking lot before walking a hundred meters or so to the strange little church.

The church is the Church of St. Nicholas. According to Wikipedia, it is a Pre-Romanesque style Roman Catholic church located in the field of Prahulje, one mile from Zadar, between Zaton and Nin. It was built on the earthen pyramid mound on top of the Liburnian prehistoric tomb. The church is the only surviving example of early Romanesque architecture in all of Dalmatia. It was built at the beginning of the 12th century and is dedicated to Saint Nicholas. 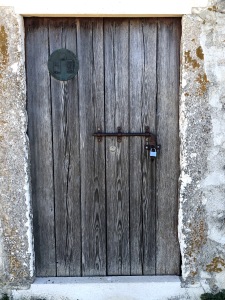 We climbed the steps up the mound to the church and walked around it. Not being very large, that took a few seconds. The door was locked. A tad disappointed, I turned to leave and caught a glimpse of an old Priest in a black cassock at the bottom of the steps. I turned to tell my companion and then turned back again. No one there. Vanished without trace. I was convinced I saw this Priest and so explaining to my companion, I started looking behind the small trees at the bottom of the steps. No one there.

I think I had a glimpse of the otherworld – the past.

One thought on “A Glimpse of the Otherworld?”